Erwin Piscator (1893-1966) is widely considered one of the most influential producers of the twentieth century. He received his initial training in a traditional theater in Germany, but the battlefields of World War I radicalized his outlook on life. He denounced the prevailing Naturalist mode within German theater as “bad photographs taken indiscriminately by bourgeois amateurs” and sought new forms and content to express the pressing social and economic issues of the day.

Together with the playwright Bertolt Brecht, Piscator developed the Epic Theater in Weimar Berlin. Making use of montage, lectures, and multimedia elements, Piscator’s political approach challenged the emotional and aesthetic dimensions of conventional 19th century drama. Piscator brought his innovative production methods to America in 1939, when he became the director of the Dramatic Workshop at the New School and the Studio Theater in New York. He arrived in New York after a complicated journey out of Europe, fleeing the Nazis.

Although not Jewish, Piscator promoted the literary work of Jewish authors such as Ernst Toller and Anna Seghers and was a dedicated antifascist and anti-Nazi.

He employed Wieland Herzfelde and John Heartfield, two politically radical visual artists, as stage designers. The prominent comedian Max Pallenberg played the title role in the anti-war play, The Good Soldier Švejk, one of the numerous Jewish actors Piscator worked with during his long career.

By the late 1920s, Piscator had successfully established himself as a leading director of plays that often provoked controversy and heated criticism. After the financial collapse of Piscator’s own theater in 1929, he gladly accepted an invitation from the Soviet film company Meshrabpom in Moscow in 1931 to produce a film. The Revolt of the Fishermen of St. Barbara, based on a novella by the German-Jewish author Anna Seghers, was Piscator’s first film project. In style and content the film continued the tradition of Serge Eisenstein’s The Battleship Potemkin, but by the time the film was finished in 1934, it had missed its objective, to educate the German workers and farmers about the dangers of rising fascism.

Piscator’s next great project was to create an antifascist German-language worker’s theater that would assemble all German theater professionals who had fled Nazi Germany. It was to be situated in Engels, the capital of the autonomous Republic of the Volga Germans. The idea never materialized, but Piscator was elected president of the International Revolutionary Theater Association. In this capacity Piscator was invited to Paris in 1936 to attend the International Theater Conference in Paris.

En route, he traveled to Salzburg to meet with Max Reinhardt in Austria, who introduced him to his choreographer Maria Ley. Piscator and Ley fell in love, married in Neuilly-sur-Seine, and subsequently settled in Paris. Cautioned not to return to Moscow, where the infamous “show trials” against leading intellectuals and artists had begun, Piscator embarked on putting together a theater production of Leo Tolstoy’s War and Peace, which he hoped to realize in the USA. 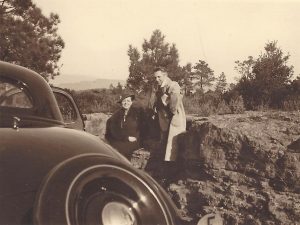 At the end of 1938, Piscator and Maria Ley left France and arrived in New York on January 1, 1939. After several months of negotiations, plans for a production of War and Peace fell through. In the meantime, Piscator’s visitor’s visa had expired and he approached Alvin Johnson, the dean of the New School for Social Research, for employment. As references, he brought letters of recommendation from Max Reinhardt, Thomas Mann, and others. Alvin Johnson knew Piscator’s work well and offered him a position. Piscator founded the Dramatic Workshop and Studio Theater, a school and theater in one, under the umbrella of the New School. The school developed according to Piscator’s principle of “learning by doing.” The aspiring directors and actors had to design their own costumes and sets and analyze the content of each play. Prominent actors such as Tony Curtis, Marlon Brando, Ben Gazzara, Judith Malina, Tony Randall, and Elaine Stritch were all graduates of Piscator’s school.

Aspiring playwrights had the opportunity to have their works-in-progress produced, including plays by Tennessee Williams and Arthur Miller. The faculty included the cream of the European theater world, for example, such prominent writers as Carl Zuckmayer, composer Hanns Eisler, and actors Herbert Berghof and Fritz Kortner. Piscator introduced American audiences to plays that had never before been seen in the United States, including Lessing’s Nathan the Wise.

However, financial difficulties and an increasingly hostile political climate, triggered by Joseph McCarthy’s anti-communist hysteria, had a severely crippling effect on Piscator’s creativity. When he received a subpoena to appear before the House Un-American Activities Committee, Piscator decided to leave America.

In early October 1951, Erwin Piscator returned to Germany. He spent the next eleven years as a guest director throughout Germany and Europe, finally being appointed artistic director by the Freie Volksbühne Berlin in 1962. Piscator opened the 1963 season with the provocative play The Deputy by Rolf Hochhuth, which takes aim at the Catholic Church for its silence during the Holocaust. The play’s spectacular success was followed by Heinar Kipphardt’s In the Matter of J. Robert Oppenheimer in 1964 and Peter Weiss’s The Investigation in 1965, which restored Piscator’s reputation after his original success in the 1920s.

During rehearsals for The Officers’ Revolt, a play about the attempted assassination of Hitler on July 20, 1944, by German officers, Piscator suffered kidney failure and was taken to a hospital. He lived to see the premiere of the play, but died shortly after the premiere on March 30, 1966, in a hospital in Starnberg.