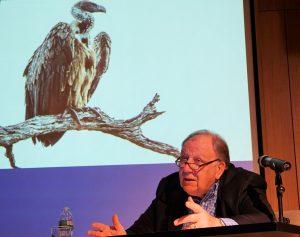 has been working for more than 50 years at various theaters in Europe and in the US. In 1985 he received the New York Theater Club Prize for this direction of Bertolt Brecht’s The Jewish Wife. In the summer of 2003, he was awarded the Knight’s Cross of the Order of Merit by German Federal President Johannes Rau for his merits in promoting understanding between peoples by way of art. In April of 2016 the President of the Republic of Austria Dr. Heinz Fischer bestowed the Austrian Cross of Honor for Science and Art on him.

In 1983, he founded the Elysium Theater Company in New York, which he headed as Artistic Director till 1990, when he was called to be the Intendant (Artistic Director) of the Landestheater Mecklenburg, Neustrelitz. Elysium Theater Company specialized in presenting German-language plays in English translation. Many productions were American premieres, such as Stella by Johann Wolfgang von Goethe (1984), Death and the Fool by Hugo von Hofmannsthal (1986) in connection with the Vienna 1900 exhibition at the Museum of Modern Art, Katzelmacher by Rainer Werner Fassbinder, On the Chimborazo by Tankred Dorst (1987), Madonna and Mike by Bernhard Schärfl, Shooting Rats by Peter Turrini. In March of 1990, he directed the world-premiere of A Metaphysical Conference by Viktor Frankl as part of Viktor Frankl’s 85th birthday celebration at the Elysium Theater Company. He also directed the world premiere of Paul Tillich – Shaking the Foundation by David Randolph. Since 1993 he has been Artistic Director of Elysium – between two continents.

Since 1992 Gregorij von Leïtis had been active as guest director, first at the State Theater in Linz, later also at the State Theater in Bregenz. In 1998 he directed Kafka’s A Report to an Academy at London’s Bloomsbury Theater as part of the Festival of Central European Culture, as well as the New York premiere of Viktor Ullmann’s opera The Emperor of Atlantis at the Guggenheim Museum in its acclaimed series Works & Process and at the Miller Theater. In 2000 he directed the New York premiere and in 2001 the Italian premiere of Ernst Krenek’s chamber opera What Price Confidence? The New York Times wrote about The Emperor of Atlantis: “This production provided a chance to hear this deeply moving opera”. Corriere della Sera commented on the Rome premiere of Krenek’s chamber opera What Price Confidence? at the Teatro dell’Opera di Roma: “The deciding factor in conveying the spirit of this chamber opera is the direction of Gregorij von Leïtis”.

Since 1997, Gregorij von Leïtis’ work has emphasized staging again the works of composers and writers who had been persecuted and silenced by Hitler’s executioners. In 1997, he recited the New York premiere of The Lay of Love and Death of the Cornet Christoph Rilke at Carnegie Weill Recital Hall. This is one of the last works which the composer Viktor Ullmann was able to finish in the concentration camp Theresienstadt, before he was deported to Auschwitz in 1944 and killed there. Since then, he has performed this composition for speaker and piano internationally in more than 40 cities. On March 3, 2020, he presented Ullmann’s Cornet for the 55th time at the Czech Consulate General New York. The New York Times praised the strong, moving performance of the Cornet, and called Gregorij von Leïtis and the accompanying pianist “effective advocates for this music.”

In 2005, he directed the premiere of Egon Lustgarten’s opera Dante in Exile in Bernried, and later on in New York. In regard to the Lustgarten premiere, the Süddeutsche Zeitung wrote: “Rebirth of a forgotten work of opera (…) under Gregorij von Leïtis sensitive direction”.

With Michael Lahr, he founded the Lahr von Leïtis Academy & Archive in 1995, whose president he is. In addition, Gregorij von Leïtis is a member of the advisory board of the Nietzsche Forum e.V. Munich, and the Viktor Ullmann Foundation London. He is also a member of the Lansdowne Club in London. 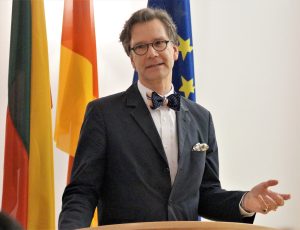 As the program director of Elysium he has unearthed numerous works by artists who had to flee their home country under the pressure of the Nazi regime, or who were murdered. Many of these compositions were performed for the first time in concerts in Europe and the U.S. He gives introductory lectures for all Elysium programs. At the same time, he lectures regularly on questions of general social and political significance. Among other places, he has lectured at St. Norbert’s College in De Pere, WI, at the American Academy Berlin, at the Leo Baeck Institute New York, at the Ludwig Maximilians University Munich, at Deutsches Haus at NYU, at the university in Catania, at the Mozarteum University in Salzburg, at the Vytautas-Magnus University Kaunas, at the University of the State of Florida in Tallahassee, and at the State Institute for Science of Art in Moscow.

He has directed various Elysium productions, such as New Beginnings: Fragments of an Era, Found Pieces: Musical-Literary exploration through the Lahr von Leitis Archives, and Remember – For the Future, and conceived many programs, such as The Gospel according to Kafka, Defending Democracy, and Heinrich Heine: Tell me what does it mean to be human?

Michael Lahr von Leïtis is Executive Director of The Lahr von Leïtis Academy & Archive, Chairman of the Erwin Piscator Award Society, and an advisor to the Nietzsche Forum Munich e.V. He is a Fellow Researcher at the Exil.Arte Center of the University of Music and Performing Arts in Vienna.